Saving changes with a commit

In the following example, we have the w3docs.txt file with changed content on the current branch. To commit the staged snapshot of the file, first, you should stage the file with git add command.

Running git add will move w3docs.txt file to the Git staging area. Use the git status command to see the output.

The green output indicates that w3docs.txt will be saved with the next commit. The commit is created by executing:

Running git commit opens a text editor (we can set it via git config) asking for a commit log message and a list of what is being committed:

The canonical format of Git is used for summarizing the whole commit on the first line in less than 50 characters, then it leaves a blank line, after which gives a detailed explanation of the changes. For example:

The first line in the commit message is the subject line, the rest is its body.

How to update (amend) a commit

The following example opens the configured text editor pre-filled with the already entered commit message. It means you are editing the last commit instead of creating a new one.

Git is based on the snapshots whereas SVN tracks differences of a file. svn commit consists of a diff which is compared to the original file added to the repository. Git records the whole content of all the files in every commit. When committing or saving the state of the project, Git takes a snapshot of the current file look and stores a reference to that snapshot. If there is no change in the file, Git doesn’t store it again. 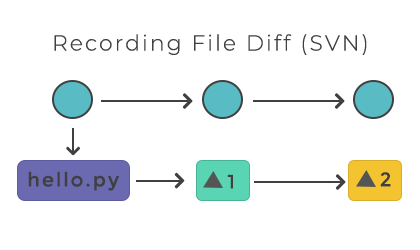