Consider there is a repository that contains pre-existing branches. If you want to switch between these branches you can invoke git checkout. Executing git branch will display the list of available branches and the current branch name.

The git branch command is executed to create a new branch. However, git checkout -b argument creates a new branch and directly switch to it:

In the given example, the -b flag tells Git to execute git branch <new_branch> before invoking git checkout <new_branch>.

Invoking the following will point HEAD to the tip of <branchname>:

The git reflog command can be executed to view the history. Read more about it on our git reflog.

It is common to use remote repositories when working with a team. Each remote repository can contain its own branches. So as to checkout a remote branch git fetch should be executed to fetch the contents of it:

The modern versions of Git allow checking out the remote branch like a local branch:

While in the older versions of Git, you should create a new branch based on the remote one:

Then checkout a new local branch and reset it to the remote branches last commit with the git reset command:

“Detached HEAD” state allows you to check out commits and examine the repository’s older state without creating a local branch. The HEAD command updates the git checkout to point the specified branch or commit. No problem will occur, when HEAD points to a branch, but when it points to a commit, it moves to a “detached HEAD” state.

“Detached HEAD” state is a warning which informs that your activity is “detached” from the project’s development. Developing a feature in a “detached HEAD” state, no branch will allow you to get back to it. When checking out another branch you cannot reference your feature: 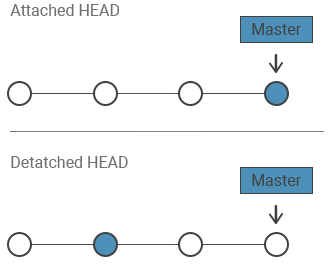