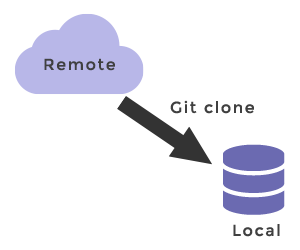 First of all, the git clone command is used to target an existing repository and clone or copy it in a new directory. A local copy stored on a server, that is accessible at example.comcan be obtained using the SSH username x_person , like this:

The git clone initializes a new Git repository in the team-project folder on your local machine and fills it with the contents of the central repository. After that, you can cd into the project starting modification of files, commitment of snapshots, and interaction with other repositories.

Cloning to a certain folder

You should make a clone of the repository at <repo> into the folder called <directory> on the local machine.

Clone the repository at <repo> and clone only the ref for <tag>.

Configuration options are the tools you need for making Git work the way that suits best to you or your team. The most common ones are presented below:

Git has its own URL syntax. It is used for transferring remote repository locations to Git commands. Git URLs are important because git clone is mostly used on remote repositories.

Git can use the following protocols for data transfer: Git , Secure Shell (SSH) , HTTPS and Local. It should be noted that all these protocols require Git to be installed and working on the server except for HTTPS protocols.