Git gives the opportunities to share branches between repositories instead of sharing a single changeset. In this chapter, we will learn about the set of commands that have their responsibilities in the syncing process. Find detailed information about the commands on our next pages. 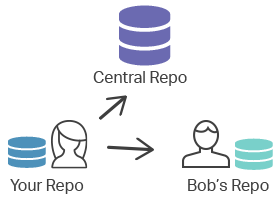 The git fetch command is used to download commits, files and references from the remote repository into the local repository. It displays what other members of the team have been working on. Both git fetch and git pull are used for downloading the content from the remote repository. The git fetch command just shows the progression of the central history while the git pull command not only downloads the new content but also directly integrates it into the current working copy.