The git reflog command is used for Git to record updates made to the tip of branches. It allows to return to commits even to the ones that are not referenced by any branch or any tag. After rewriting history, the reflog includes information about the previous state of branches and makes it possible to go back to that state if needed. 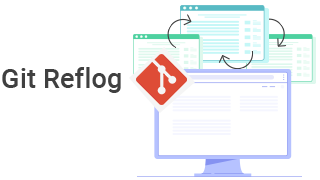 There are some git commands, to which a reference specifying parameter or a “ref” can be applied. This parameter serves to point to a commit. With the help of this reflog mechanism, you can keep track of the update time of git refs in the local repository.

It is the shortcut of this:

The command above outputs the HEAD reflog. The output looks like the following:

Be default, git reflog outputs the reflog of the HEAD reference, which is considered to be an iconic reference to the branch, which is currently active. You can access a git ref by using the [email protected]{qualifier} syntax.

Execute the following command for getting the entire reflog of all the references:

Pass the current branch name to git reflog show, if you want to see the reflog for it. In the example below displays a reflog for the test_branch branch.

Using the command below will output a reflog for a git stash:

There is an attached timestamp to each reflog entry.They can be leveraged as a qualifier which is token of Git ref pointer syntax. This allows to filter Git reflogs by time. Here are some examples of time qualifiers:

Here we will have a diff of the current master branch against master 1 week ago.

There exist some arguments, considered to be subcommands, that are accepted by git reflog. These subcommands are presented below.

The git reflog show subcommand is an alias for git log -g --abbrev-commit --pretty=oneline. It is passed by default. In the following example, the two commands are equivalent to each other:

The git reflog delete subcommand is designed for deleting passed reflog entries. However, the end users avoid executing this subcommand, because, as in the case of git reflog expire , there is a risk of data loss.

Actually, commits are never being lost in Git, even during history rewriting operations. Let’s see an example of a git log --pretty=oneline that looks like this:

Now suppose we commit some new changes to this repository and run the following:

At this stage, in order to make an interactive rebase against the master branch, we need to execute the following:

While rebasing, the s rebase subcommand marks commits for squashing into the most recent "API changes" commit. As a result of squashing the commits, the git log output now has a look, like this:

It now seems that commits marked for squashing are no longer there. If you need to operate on a squashed commit, you can leverage the reflog.

There are reflog entries for the start and finish of the rebase and preceding those is the "API changes" commit. The reflog ref can be passed to git reset in order to reset a commit before the rebase.

This command will move HEAD to that commit with "API changes", and restore the other squashed commits.